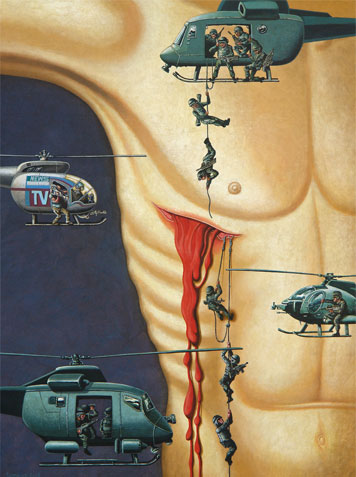 Tamayo employs a resource that is evident in a good many of his previous works, when he disarticulates with ingeniousness (call it humor) the at times pathetic sense of existence and succeeds, through it, in turning pain into a carnival. (1)

Uf! War again! is the phrase any of us would have pronounced had we known it was the central topic of artist Reinerio Tamayo’s most recent show in Villa Manuela Gallery.

The fact is that war, whether preventive, holy, psychological, muffled, cold or dirty, has been a much too often handled topic. The references to that subject have been numerous and diverse. The tone employed to refer to the themes having to do with war has been generally one appealing to the sensibility. The intention has been to identify the viewer spectator with the acting individual understanding as acting all those individuals who in one way or the other are involved with war matters by provoking images that produce feelings of sorrow or pain. The newsreels have thus shown images of dismembered bodies, faces of infants in pain, magazine covers with beautiful but equally terrified green eyes and infinite number of such kind of names.

But even if we are so much used to it already that we give for granted its truthfulness, we should ask ourselves why such a typology has been chosen to broach war conflicts. Disregarding the fact that it is part of a far reaching process related with the manipu lation of information and hence of the individual, it must be taken into consideration that war is part of the phenomena regarded as earnest by social consensus; such earnestness is granted by the nature of the effects caused by the phenomenon.

The fact that war is bad is therefore established as part of the principles that make up the ethical standards of society. And it really is, although they occur one after the other and even with apparent justification. However, the phrases with evident anti-war content such as make love, not war and no to war, say no, no, world peace and many others sound hollow, and their insertion in the social space might be assumed as a kind of formal attitude. The very over-saturation of the media by the war event has unleashed a countercurrent that has deprived of communicational efficacy the entire contents of all materials focusing on its punishable side, i.e., said approach, more than achieving its objective, has subverted the purpose of the message. The intention for world peace has been discredited, among other reasons, by making it part in an almost permanent and, I would say, compulsory manner, of every speech of a public figure, say a potential or elected president, the Pope, a Miss Universe candidate, etc. However, this group of elements has created a kind of disengagement toward the phenomenon in society that has appeared even as an almost omnipresent reality. The priority of the particular needs over the social ones, but above all the treatment given to the topic in the media, whether or not in those traditionally known as mass media, have granted an aura of emptiness to every discourse referred to war.

Reinerio Tamayo acknowledges the importance of keeping on speaking of a theme that is so delicate for the present world, but how should one approach such an event which has become an ineluctable reality not to be consigned to oblivion since it might be considered part of human nature without falling into the commonplaces that have already discredited any type of discourse? The artist makes us a proposal in which parody, mockery and laughter seem to be enthroned as essential resource.

To some it would be an irreverent attitude, condemnable on the other hand, to approach war in tone of a joke. Considering that it is part of the group of earnest topics, the reference would imply an essential requirement of solemnity. But no disrespectful intention is perceived in the works of the artist; on the contrary, the joke has been used with a sharp reflexive intention. All irony is, more or less, a form of simulation, of insincerity, since it consists in saying the contrary of what one feels or thinks (2). According to Mañach in his essay Inquiry on Joking, one of its values lies precisely in its critical functionality. Joking almost always results from a state of impatience, a mistrust of some limitation. Perhaps it is none other than having to remain silent in the face of a show that lasts too long or bores, but which will always be the restriction imposed by an authentic or by a false authority. It is this critical possibility the one Tamayo benefits from; he does not pretend to laugh at war, in fact, is does not seem a laughable theme at all. He avails himself of such a gadget in order not to commit the same sin of sensitizing in a situation that has an effect on him.

This trend to use the satiric strategy to refer to what seems censurable to us, to what we do not agree with, is already part of our national identity. If not, what were El Bobo and Liborio doing? The Cuban, indeed, is capable of joking, of assuming through laughter, those social circumstances he is hopelessly compelled to live with. Joking, therefore, is the expression of a circumstance conveying the fatal destiny of the social elements implied in it (3).

Although it could be asserted that the previous works were more self-referential since they handled groups of problems of art itself the market, Van Gogh, the classics of Spanish painting they now have a universal halo because the themes concern all of us. Notwithstanding, this more universal nature appears in the language employed, in addition to the theme. Together with the parody, Tamayo uses the re-contextualization of diverse icons and aspects of universal culture an element that is already characteristic in his work, although used for other purposes, as we had already analyzed. The inter text appears already in the exclamation Magma mia!!!, an alteration of the Italian phrase Mamma mia!!!, which has become the title of the exhibition. A semantic relation is established between both words since magma becomes an inner substance therefore associated to mother closely linked to processes of the Earth’s formation. Magma has also a clear link to explosion, fire, destruction, inherent in turn to the concept of war. From then on a series of symbols coming from the cinema, from painting itself, architecture, religion, begin to reveal themselves, which evidently cover a very wide spectrum of reality, as it happens with war.

There are two pieces in which he links the cinema with painting, but differently. In Stars War it is possible to establish a connection with his former production, particular as referred to the formal aspect. This time it is the cinema that provides the title. However, it is the title itself, borrowed from a very popular movie, which makes the interpretation almost automatic, regardless of the use of an iconography associated with national elements: the Yara movie theater, old cars, the Cuban flag. On the contrary, in The Cry he represents a timeless city, with the famous character King Kong en top of the Empire State like in many other moments of the film. However, his scenario is totally different from the one he knows. Now the vision is that of a convulse city, immerse in disaster. This New York is witnessing the events of September 11, 2001. In this case we cannot say that there is a clear intention to ban the appeal to the sensible plane. The fact is that the latter is presented in a very subtle way based on the connection established by the title with Munch’s work. The former monster is vividly impressed by the events that occur some decades after he was the terror of the New York space, where now there is a new fright. The ape gives a cry of vexation since he has been turned from a criminal into a possible victim. The same phenomenon occurs in two different scenarios, whereby Tamayo intends to draw attention to the fact that there are no invulnerable places.

The same line is followed by Evolution, where the very concept applied to the human species is satirized. The attitude of the preceding individuals in the evolution scale of stoning the homo sapiens tells of the disagreement of the former with their performance in the world. A paradox is then established between what should be and what really is. In theory, the being in a higher stage of evolution should not tend so much to violence. The contradiction he shows between the concepts of intellectual development and war is evident here. In this way, the allegedly more civilized being is punished by his predecessors, since they consider him the cause of the existing situation.

The Wonder Lamp plays with the idea of the gift. Morphologically changed into a war artifact, it induces us to ask ourselves about the role of this new type of lamp of wishes, and which would be the characteristics of the wishes to be granted.

The Seven Wonders of the Modern World is a work in which the constructive highlights acknowledged as modern wonders are disguised with a war trousseau. The Chinese Great Wall is a rank of tanks, Christ is an armed soldier, and so, successively, the Taj Mahal, Machu Pichu, the pyramid of Chichen Itza, the Roman Coliseum and Petra’s door are offended by warlike allusions; which leads us to reconsider the questioning of which is the true marvel of the modern world. Behind this image hides a crude message: the wonder of the modern world that mankind has been capable of creating has no other name but violence.

It is not the first time that the artist uses this methodology of approach to certain zones of the surrounding reality, although now he may have chosen a more universal theme and language. The symbiosis of mockery and earnestness has become his modus operandi. Tamayo clearly understands the dysfunctional nature of a sensibility in the fashion of Guernica, and that is why he uses a different resource. Therefore, we are not attending a show that brings out tears, but one that addresses the spectator with a laugh in order to establish it as hyperlink with deeper reflections concerning war conflicts in our contemporary world.

In the Hurricane's Eye

The Seven Wonders of the Modern World 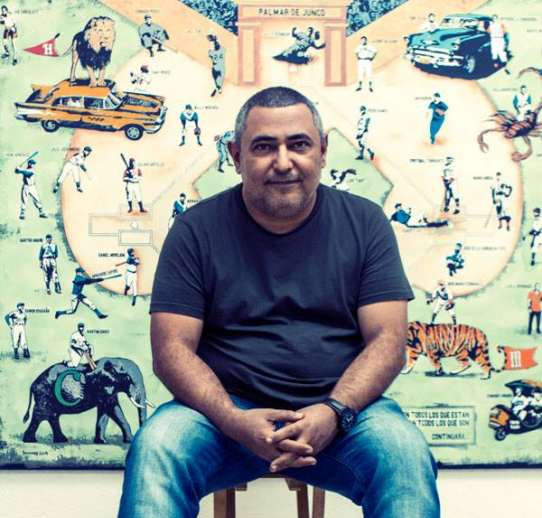 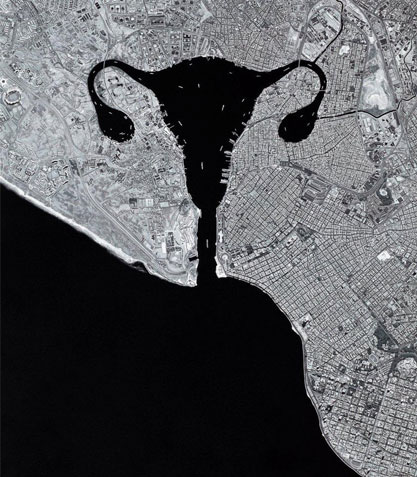 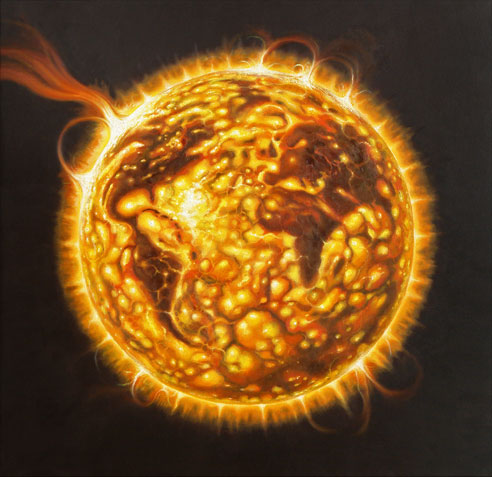 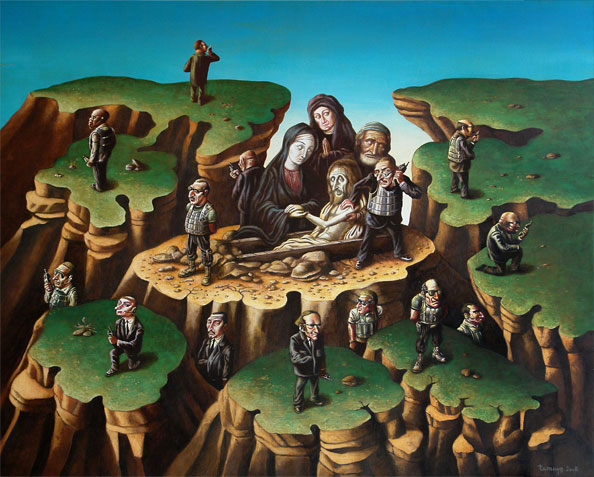 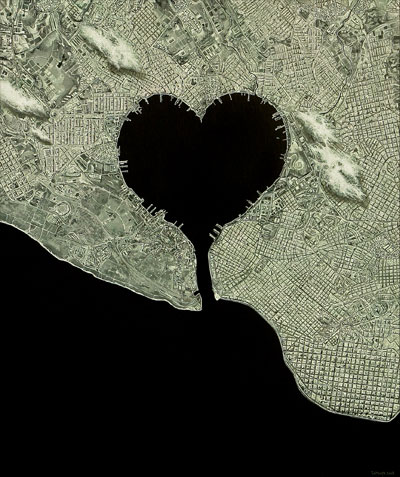 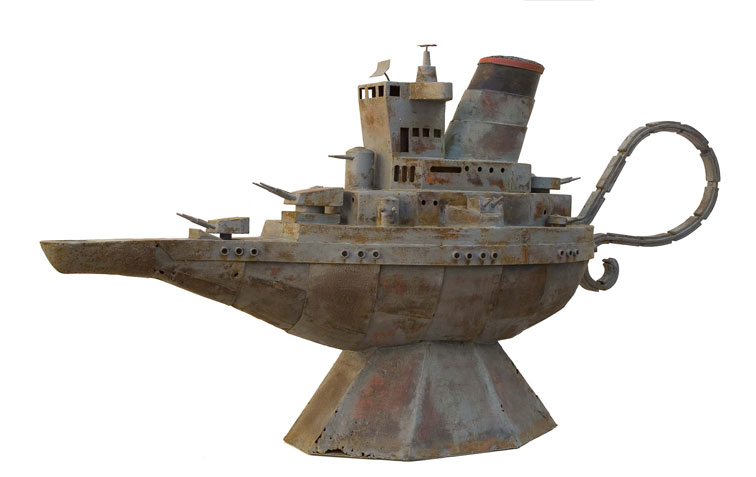 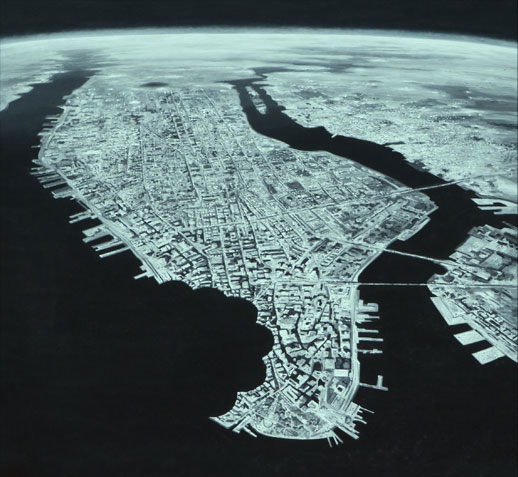 Ask
The Seven Wonders of the Modern World
Reinerio Tamayo 2008