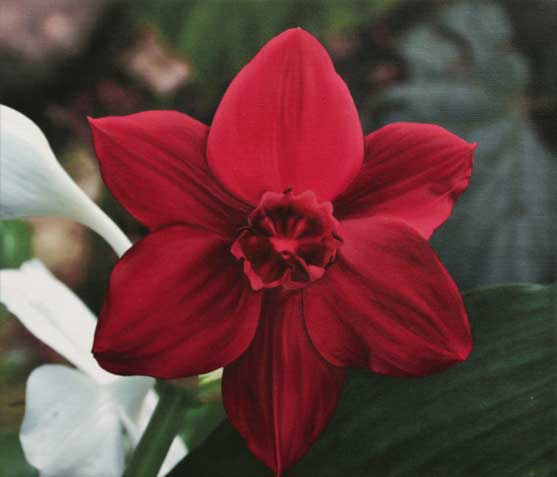 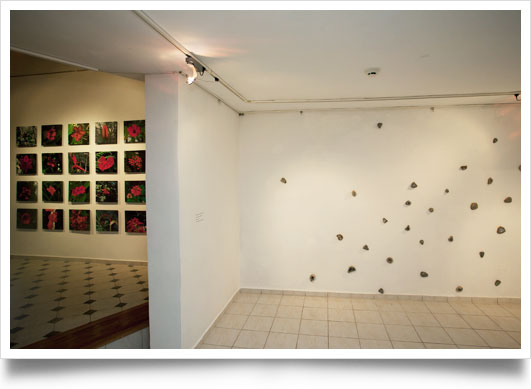 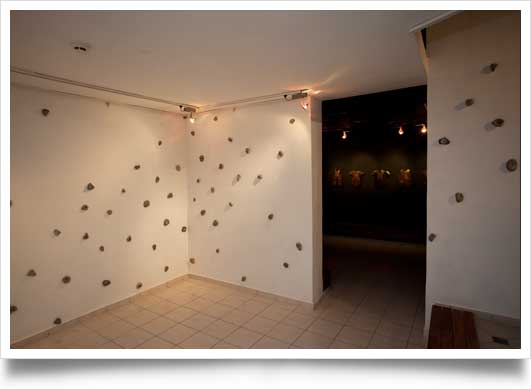 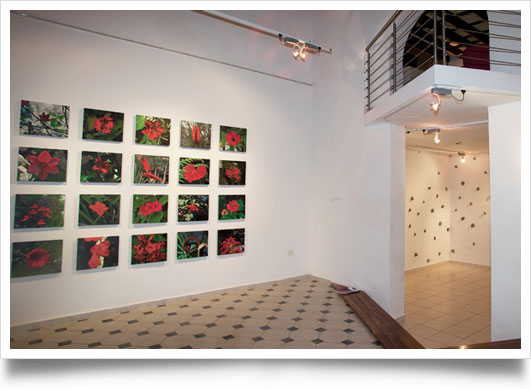 Aimée García belongs to a generation that emerged in the Cuban art scene in a period of transit that moved from the belief in the great utopias to a loss of faith or disenchantment. It was an extremely introspective period in which the slide toward new utopian beliefs relied basically on two formal resources: the pastiche and the self-portrait. The former enabled the sketching of social commentaries through images legitimated by the History of Art, while the latter placed the individual beyond the group and patented the artist as author of a work where at times the authorship was lost due to the intertextual escapades. It was a new kind of humanism in which the artist became the leading figure and center of racial, generic, domestic, historical, identity and social contradictions.

Aimée García did not escape this strategy or linguistic alibi, particularly in the case of self-representation, since in this artist the quotation is diluted, it is not tacit. Hers is an enigmatic case, since in her work we face retinal images that paradoxically contain an immense restlessness, autobiographical enough to be legitimate. Aimée has always preferred painting, that is her territory, but she does not hesitate to make large (or small) installations of embroidered metal. In another period she prioritized photography, although she always returns to the painting genre with a mysterious tension between meekness and cruelty, hedonism and perversion, fragility and robust spirit. Her entire work moves between these categories.

If we disregard two or three independent pieces (embroidered metals), we are now facing the first solo show in which Aimée García bans the self-portrait, disappears as object of evident representation and appears in a new dimension. She projects herself in flowers and annuls herself. The titles, which in this case have exceptional importance, favor the inversion of the ordinary meaning that a flower may evoke. In El jardín de la intolerancia (The Garden of Intolerance) (a title most evidently recalling Chejov), different red flowers appear in the front plane and cover almost the entire composition. Violence and all ideological references originated by the red color struggle with the flower’s beauty and apparent nobility. The flower, evidently, does not understand, destroys all hope (green remains in a second plane). It kills, like the rose kills the nightingale. The consequence of such blindness appears in Lluvia de ilusiones (Rainfall of Illusions), an installation made up of flowers in a scale of grays painted on found stones. It is obviously a beautiful work, but the truth is it cannot be crueler: the tyranny of red suffocates, frustrates any aspiration that might appear by hitting you with the resource of the pebble. The spatial distribution of one and the other are consequent with an already traditional pattern of the artist: to install the painting and design its staging from the painting and not afterwards.

In this show, the meaning is given essentially by color: she could be any landscape artist or remain in mere decorative art, were it not for the constant and overwhelming red of an installation and the permanent darkening of the other. The flower disappears as therapy, since it loses the primacy of its essence when it is made uniform under a sole shade. The natural discourse turns political, or the political discourse is so natural that the analogy is valid.

Excessive optimism is followed by nothingness, the grayish shades with black stitches. Such would be the reality of a future. That is why the flowers, still quiet, stir. They would seem like restless tombs. However, Aimée solves this existential suffocation with the piece Resguardos (Protections) (embroidered metals). This time the support chosen by her to embroider is the pattern of a boy’s pullover that announces salvation through candidness and innocence.

In this way, the entire exhibition transmits the feeling that a cycle, a turn has been achieved. It becomes a tale, a strip cartoon with a happy end.

But do not deceive yourselves: the flower (and also the patterns) as visual resources are a mere pretext from which she may profit greatly. Absolute owner of the syndrome of the hidden, she will always dazzle the visitor, but it will be a fascination, initially in the retina, that fills us with restless tickling. That leaves us on tenterhooks. 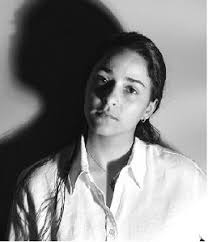 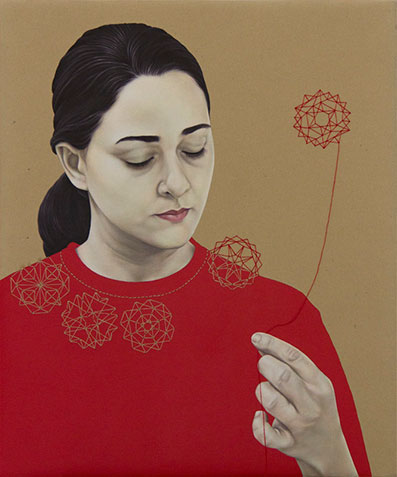 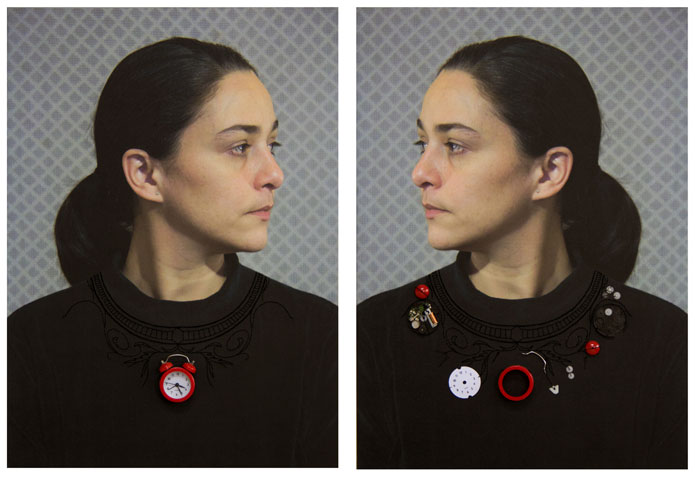 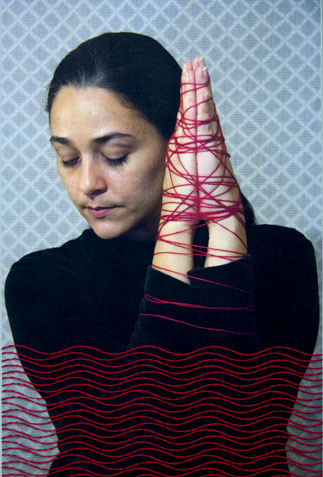 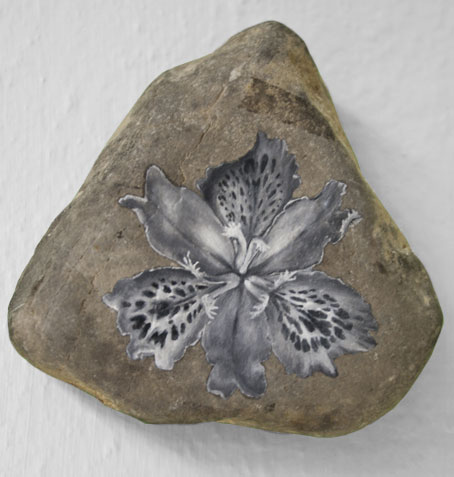 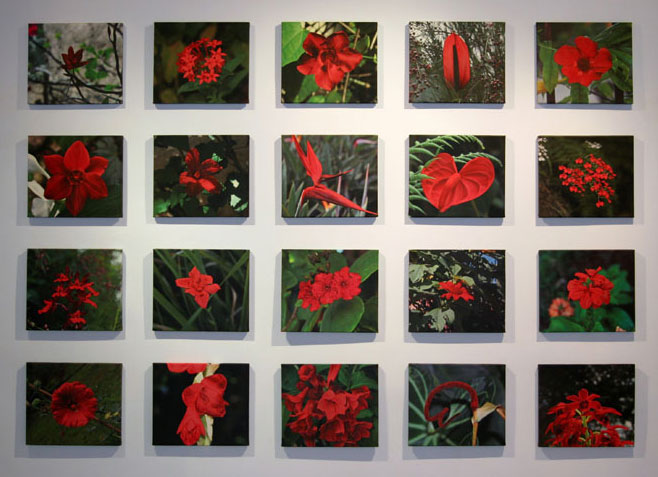 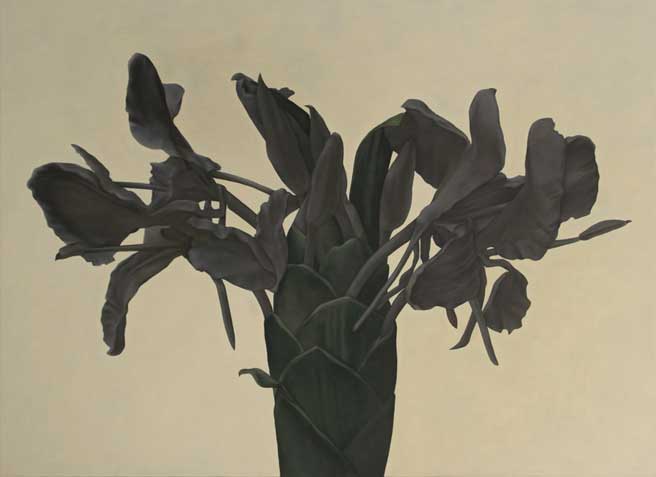 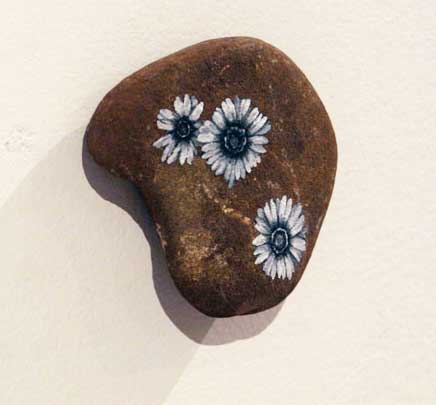 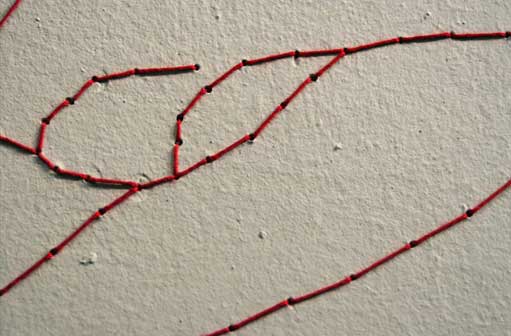 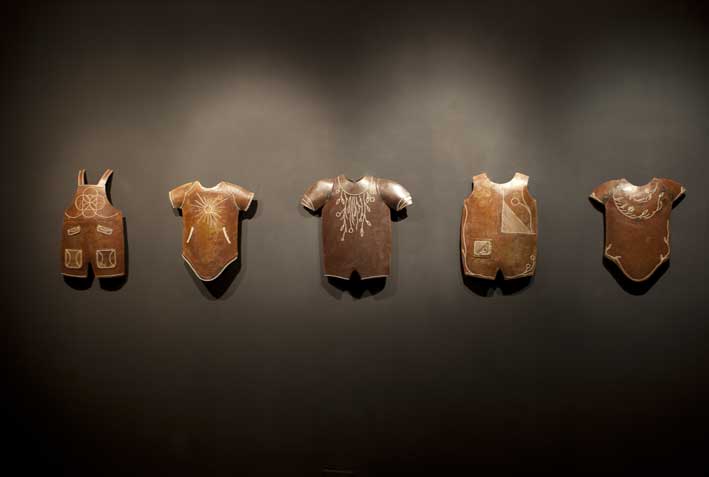 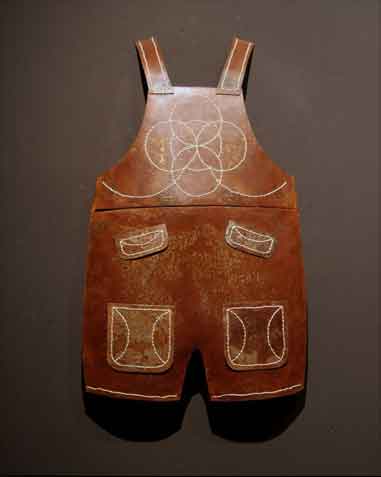 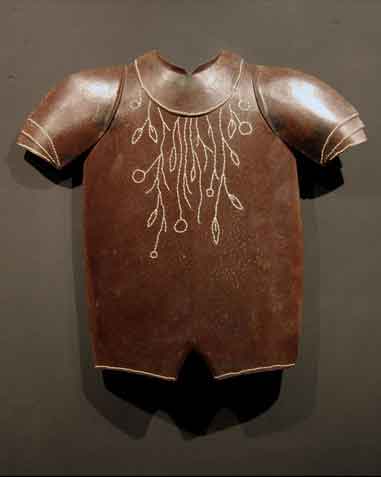 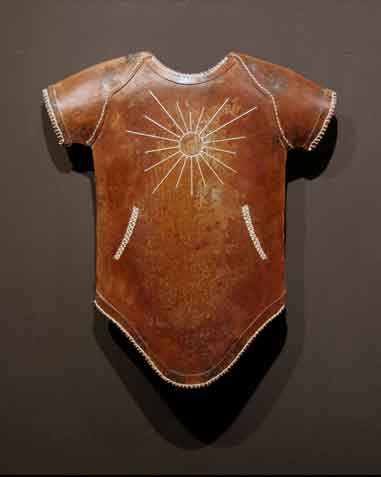 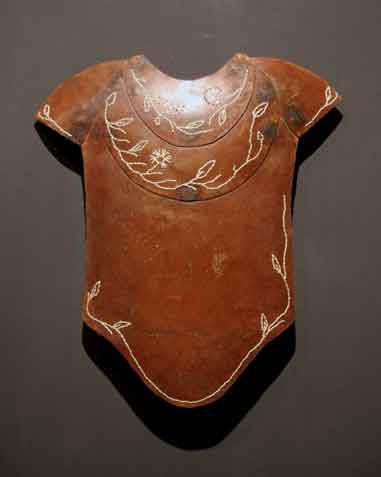 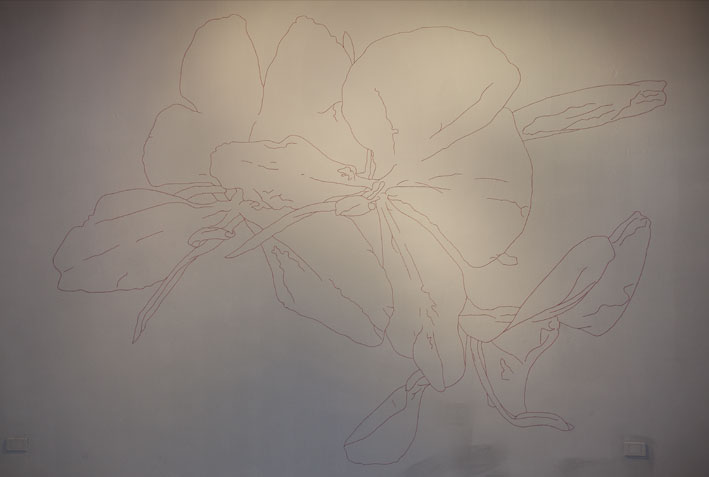 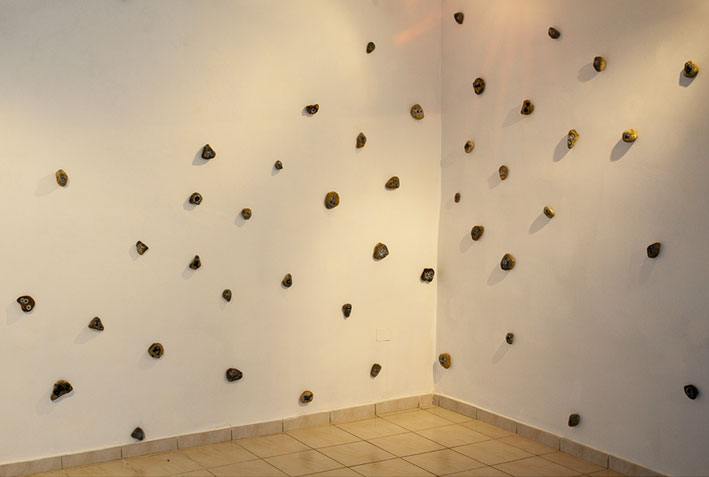 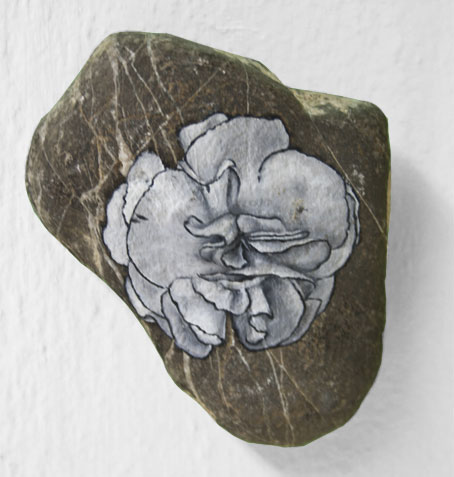 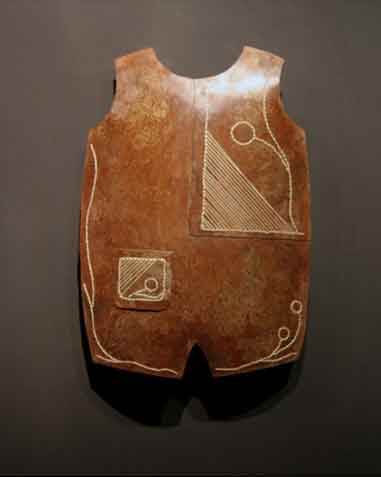 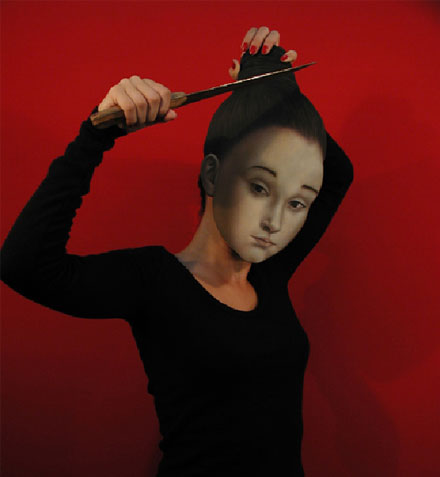 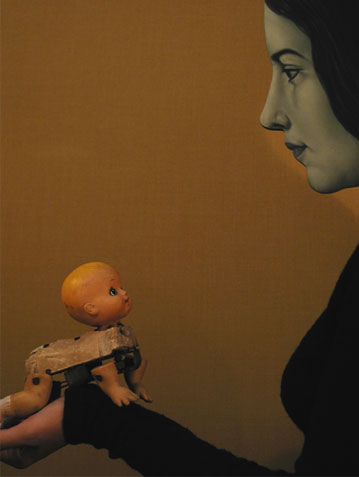 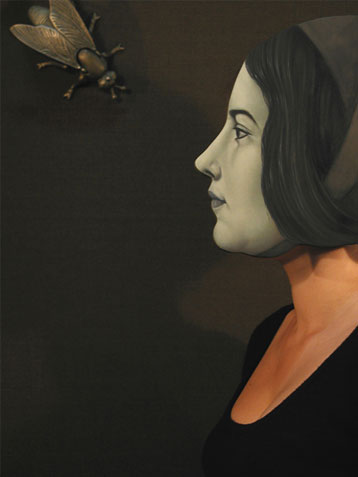 
Oil on stone
Consisting of 60 pieces,
In gallery just 6 pieces


Oil on stone
Consisting of 60 pieces,
In gallery just 6 pieces