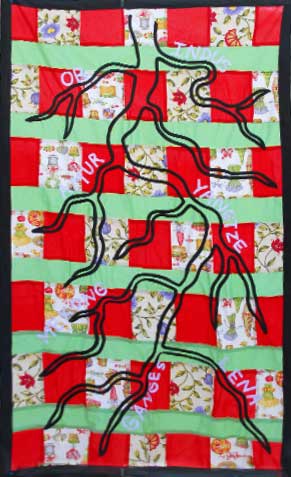 The Forest and Its Roots

Much has been written about the baroque, juicy, telluric and zoomorphic nature of Ibrahim Miranda’s work. His is a path of metaphors and searches that arouse the most intense critical interpretations. Very few of those who approach his work find it hard to discover the essence of each painting, of each engraving that shows a unique glance at our geography. And that is because Ibrahim’s steps are also the ontological steps taken by the human being toward the essential and constant concerns that burden us inside: Where are we heading? Where do we come from? Who are we?
In Los pasos perdidos (The Lost Steps) his most recent show Ibrahim reveals newly opened roads. If once a poem by José Lezama Lima Noche insular: Jardines invisibles (Night in the Island: Invisible Gardens) served him as challenge to create diverse and enigmatic maps, now it is Alejo Carpentier, with his novel Los pasos perdidos (The Lost Steps) from 1949, who helps to name this show and to pose the essential contradiction that rules it: it is not too important to state the definitive answers, what counts is to point out the roads, the steps to be taken in order to exit from the daily automatism and tediousness. Carpentier gave us a character that poses a search and a journey on ontological terms. The unnamed narrator leaves the world of the city, of disguises and representations, to enter the forest original, authentic universe where time has stopped. The same as Carpentier, the artist invites to follow the different routes he has chosen to learn and conquer in an apparently hazardous search, in a penetration of the innermost fears; in that yielding to every idea that comes up, to every new technique that tempts him. Miranda, like Carpentier’s character, moves away from civilization to find himself in a foreign, primitive environment of discoveries and beauty.
That coming and going from the city to the forest, from the outer to the inner world, is the road he chooses with his art. The constant journey to authenticity summarizes his work in the most recent years. His roads? The earth we live in: the main idea and its tributaries, like the rivers that show changing colors. The art returns to the project Cubrecamas (Bedspreads) which he started in 1997, drawing similar silhouettes of rivers but the same volume and similar tributaries. His rivers, which are the routes that flow into his life, are also the essential idea of the serigraph Los pasos perdidos (The Lost Steps). A man who tattoos a river on his face, his own life whose premonition he has predestination or fate?
Strength and color are present in this journey to the authentic. The paintings and serigraphs stop in the time of a specific place of the external map to reveal us an internal form, a peculiar glance by the artist: sea horses, snakes, dogs, and for the first time a human being is highlighted on a map (the drunkard from Sancti Spiritus). And it would seem that it is Carpentier himself who describes this inhabited world.
What most astonished me was the endless imitation of the virginal nature. Here everything seemed something else; a world of appearances emerged that hid reality, casting doubt on many truths. The forest was the world of lies, frauds and of the false visage; everything there was disguise, stratagem, game of appearances, metamorphose. World of the lizard-cucumber, the chestnut-hedgehog, the chrysalis-centipede, the larva with carrot meat and the electric fish that fulminated from the linseed crossing. (164)(1)

The rivers, like the animals imagined by Ibrahim, are limits, planes in the geographical space, walls between nature and man. The river has its own life and with its powerful central nerve does not allow man to modify its course. The cartographical tracings are also spatial limits. The artist does not invite us to break those demarcations, but rather to develop the most powerful imagination, still within the terms imposed by society and civilization. The elephants, horses and elks walk in the cities, the rivers flow through the land we step on and become fixed thoughts. Rivers like leaf veins; animals as if in relief within the world map are the discoveries made by the artist in the environment we live in. He shows them to us, in addition, full of exuberance, to feed our imagination with brightness and colorfulness.

If to penetrate in the forest of the human being we have to follow the nervous rivers and geo-poetic monstrosities of his animals as described by Orlando Hernández (2), to reach the corer of the most painful answers Miranda proposes Punishment and Captivity. His very names are a masochist temptation. Who does not like pain at some time? Who is not conscious of the need of suffering, of the detachment of all disguise to reveal ourselves just as we are? This is how the series Punishment and Captivity are, the moment of greatest introspection, where the maps of Cuba return.
The Series Punishment made from a test photograph from the 1920s where an image is captured from 360º reveals the action of a mother beating her son. Both naked, both with nothing to hide and exhibiting only the pain of the reprimand. The nudity of the flagellation becomes a psychotic and sensual action. On top of the mother that uninterruptedly beats that son, between the pain of the tears anticipated in both, the artist has superimposed maps of the Island of Cuba in which diverse parts or organs of the human being are being removed to the outside once more the inside and the outside. The map of Cuba over the naked mother that beats her son and the heart on the outside: the Island beats the son. The mother that continues beating the son and the brain on the outside: the son neither feels nor suffers already. And thus the head extinguishes, the word overflows and finally swallows or spits the Island, depending on how we interpret it. All the exposed vital organs turn the presumed human being into a snail, viscous, slow, brutalized animal that attempts to lick all the pain and take the Island upon itself.

The series Captivity, on the other hand, goes more to the outside, toward those other limits: discrimination, forced or indispensable migration, toward the discriminated ones that raise their hand in sign of demand. The Island this time becomes a dark scene of social struggles. Inside the map of Cuba, cities of the first world are signaled and named: New York, Madrid, Caracas, Ottawa. Spaces to migrate.  And there the Island turns into that winged specimen that transports people, not only to the utopian cities of their wish, but also to the concentration of people that demand, that struggle in forceful attitude.

The splitting into rivers, tributaries, animals, maps, punishments and captivities are routes in which Ibrahim Miranda searches and recognizes his self. Carpentier’s journey to the core of mankind, without civilizing artifices, is also the journey of Ibrahim Miranda’s work toward the inner understanding. And to get there he has as many roads as powerful are his imagination and artistic sense. From the extravagant and open color, the textile, the collage, the serigraph, the engraving, the acrylic on fabric with which he states his alternative ways, his necessary tours, to the whites and blacks of the pain series.
If the character from Los pasos perdidos (The Lost Steps) found his happiness when he lost his spatial sense and penetrated the world of the forest where he found the roots of life, later, when he wanted to find it again, he no longer could. The spell was lost the moment he needed things from the outer world. The desire of paper and ink on the part of the protagonist, in other words, of the recording destined only to the artistic creation, made him lose his own happiness. Miranda’s work requires that we deprive ourselves of all artifice, of all disguise; if we insist in framing him within a specific technique, within a single space or color, then the magic will be lost. Because his artistic creation does not record a knowledge, but is in itself, not only the journey but the forest and the roots. 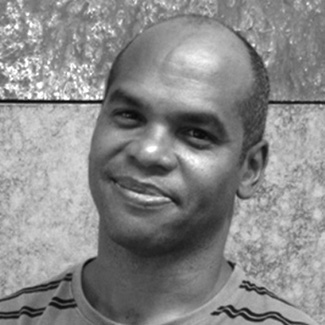 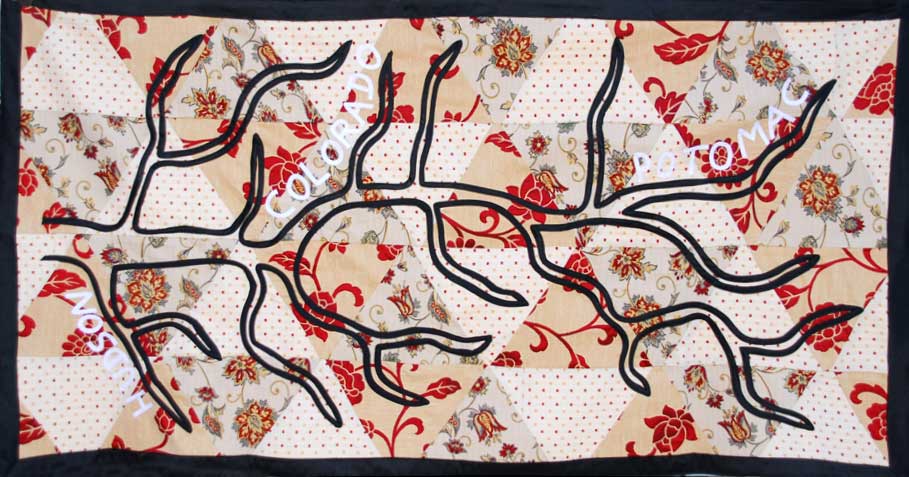 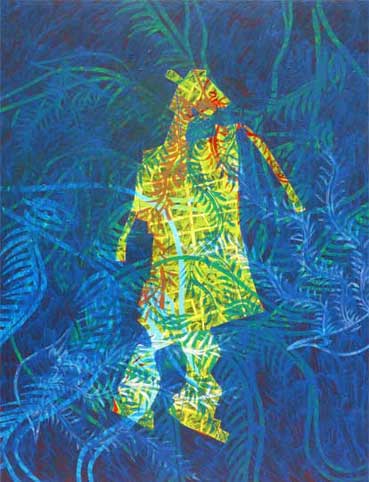 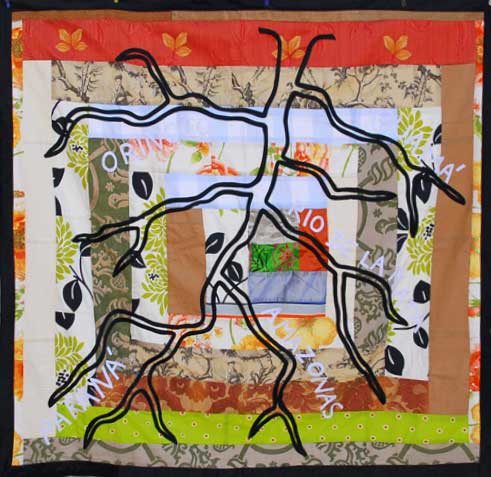 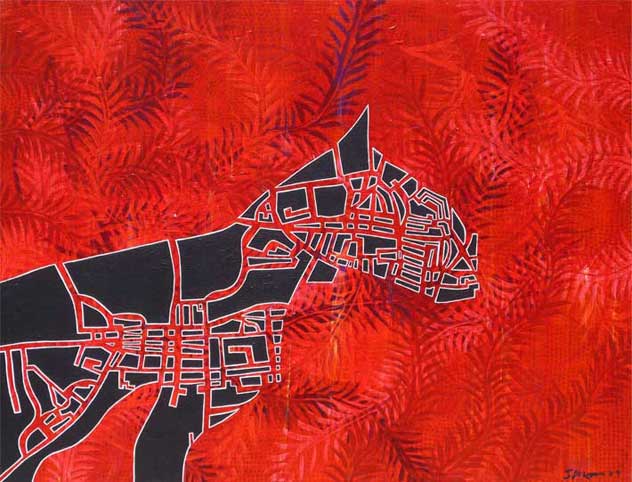 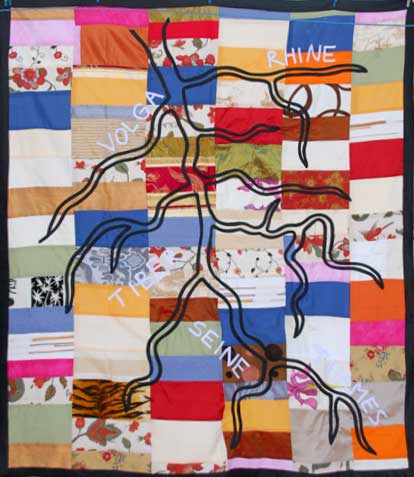 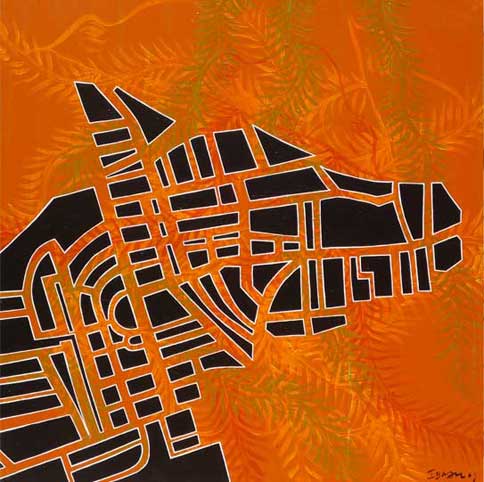 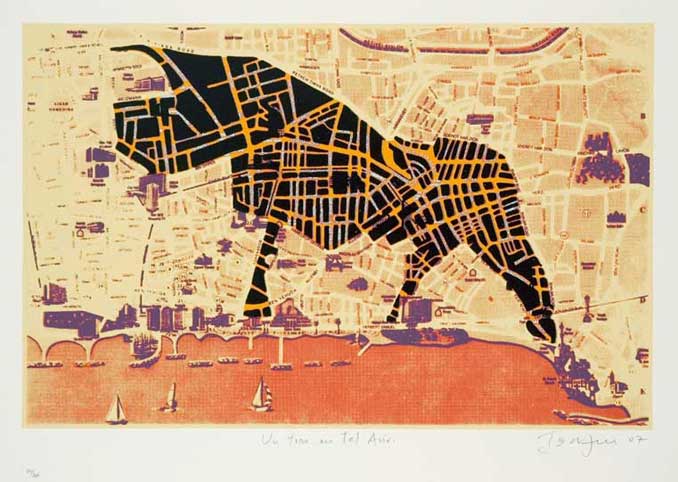 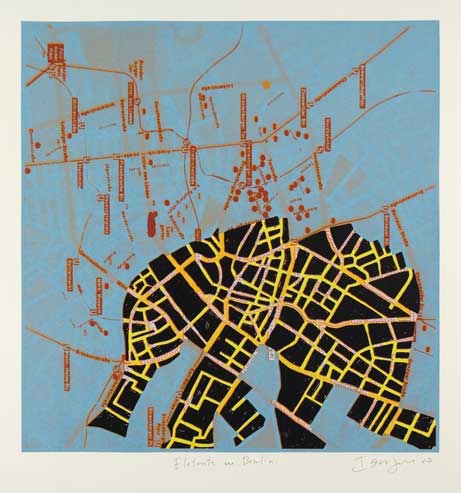 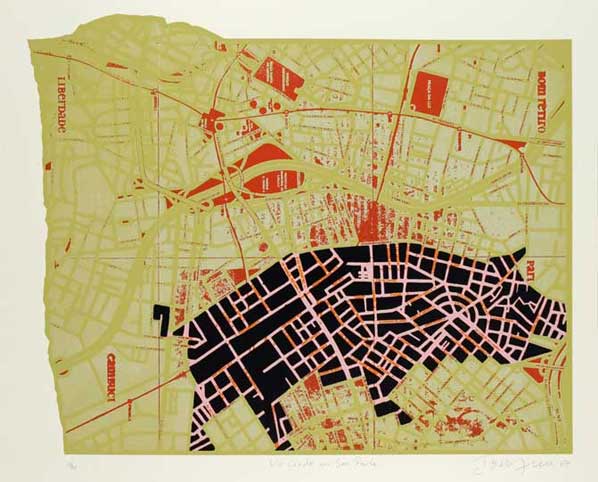