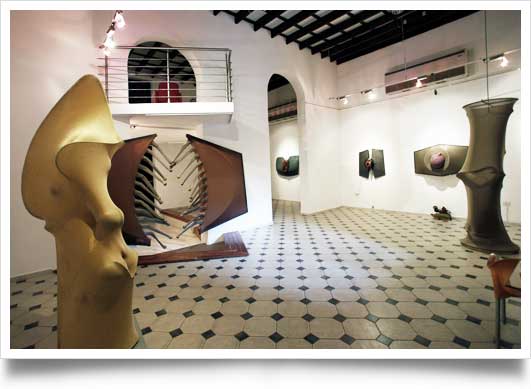 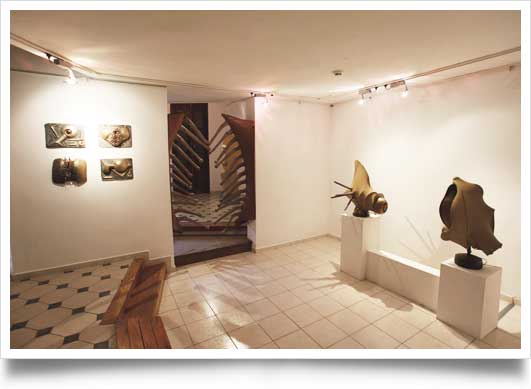 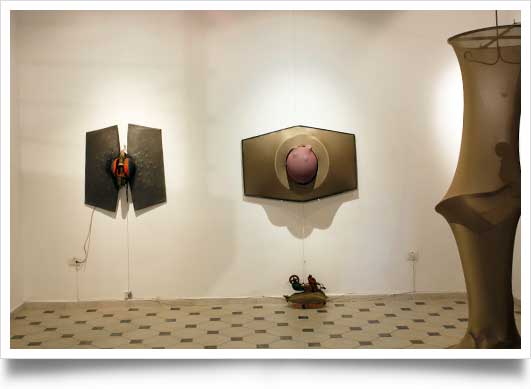 Once more Osneldo García, and with him, intact, his art and his obsessions, as if in a state of grace. On this occasion, with the show Sexcinética III at Villa Manuela, Osneldo rewrites a declaration of principles, and like every good cultist of an art so consubstantial to him, he ratifies that he is one of the good and persevering ones, and as such he will die facing the sun.
.
Osneldo has always been a national prize of the visual arts, registered in the books since 2003. His work has been and will be that search and evidence of man’s most hidden and obvious needs and of the essence of his nature; of that human nature that imbricates with the nature of the universe in its vegetal, animal and mineral condition. The pieces he brings us this time are there to remind of it. An entire production from 2010 that is new and at the same time old in the resources that support it, which grants him a wisdom, although one also senses in him a certain urgency that at times leaves us with a doubt, as if we were still seeing the concept of what will later be the core.

In spite of what some would like to disqualify as déjà vu or as orthodox pieces surpassed by the technology, he validates them, based on the concept that “the older, the wiser”, and precisely there is the beautiful wisdom and strength of the works he shows us. Works in which the art and craft of an old expert unite to prove to us that the novelty of the human being, his vital needs, anxieties and artifices are precisely in his ancestors, and that in spite of the new times of top technology, threats and neglect, his essence is still the same, like that of the entire nature that subsists in the planet.

Everything is new and at the same time, the same, fortunately!? is the message that, having seen the exhibition, leaves us meditating. When we look at the pieces, at each one and at the ensemble, we verify that this artist who has fought so hard remains unharmed in his message and mission of reminding us that the primitive in man continues to be his strength. Osneldo updates in the metal forging technique to leave no doubt about his contemporariness, and at the same time does not tire of the ludicrous empire of the use of textiles and the old mechanisms of motor and threads that so much novelty and interest granted him years ago, and that now, with full intention, he ratifies as essence. With it he seems to say that there is a natural evolution of the human species, but his corporal and spiritual condition remains the same. If reason and intelligence have developed like an arrow since the second half of last century, bringing along a wild progress of the technology, Osneldo tries to make us see that the intrinsic human kinetics has its limitations and values, which are in conjunction with those of the nature that surrounds us and we must save. In doing this he does not hide in maddening metaphors, and takes pleasure in showing that life keeps on beating thanks to the effusiveness of a primitive and unstoppable heart; that it has dreams like those of Yuliet; that the human body evolves and is full of physiological sparkles that compel us and give pleasure. Compulsion and pleasure of going, in one sense and another, through the venerated center of the Pacha Mama in a piece where everything has already been said as summary and tribute to the mother earth and to the woman.

If life itself is in the union of the Lion Fish and Sea Shell pieces as beautiful as elementary the climax of this tour arrives when we penetrate the space where the Aphrodite in the shower and the acrobat with a record erection are awaiting us. Here, all of a sudden we don’t know what to do, in the haste and with doubt. Facing the colossal figure of the Aphrodite and the minute acrobat where everything has been excelled, said and done as to technique, materials and craft, we finally become aware of a novel ancient taste, a tribute to the primitive mechanical inventiveness, to the initial figures of the wax museums and to the itinerant fair pavilions. Here, where everything seems, and is, so ceremoniously rudimentary, Osneldo introduces the redoubt of hope into the primitive condition of mankind. Far from the lucubrated sexuality, the artist faces the small and healthy vices that are consubstantial to the non-conditioned stages and reflexes of the human being. Man and woman, essential, primitive works elaborated with the oldest technique and assisted by the voyeurism and exhibitionism that, to a greater or lesser extent are part of each one of us in the manual of the instinctive and almost camouflaged and postponed sexuality on account of so much postmodern bragging on sex, lies and video films.

Osneldo’s art is as crystal-clear as water, but this exhibition is a conceptual one. Faithful to himself and to the cause of nature, he yells at us in full 2010 that the human essence continues to go through the sexed not sexist filter that marks the instincts of man and that is what saves us. If the show of a written and creased piece of paper, an empty shoebox or a gesture and the most common object taken out of context can be conceptualist, there is no doubt that such a sexed kinetic daily nature of man and that of the mother earth itself is a pure and changeless concept, as well as that obstinate renounce to the implements of the latest technology to appeal to motors and threads, as old as but efficient as the very nature of man.

Together with him, this seems to have been understood also by the good curatorship and museography that Eliseo Valdés and the team from Villa Manuela have presented us. 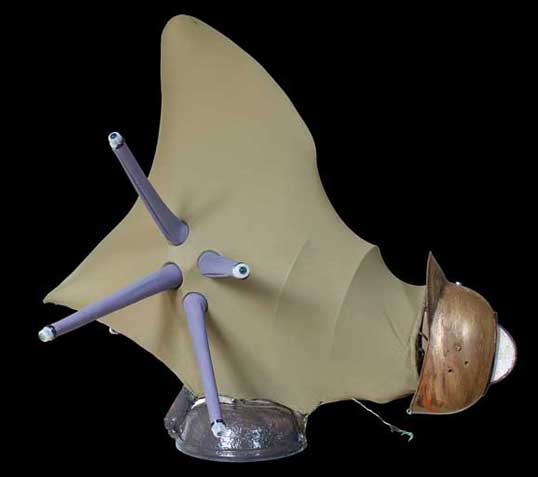 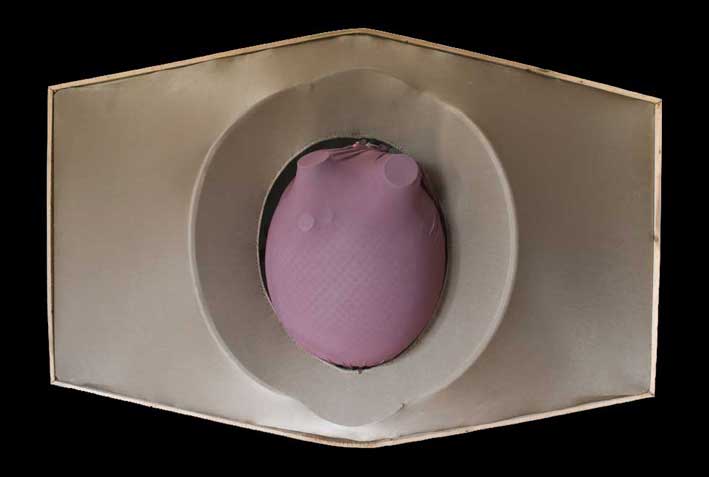 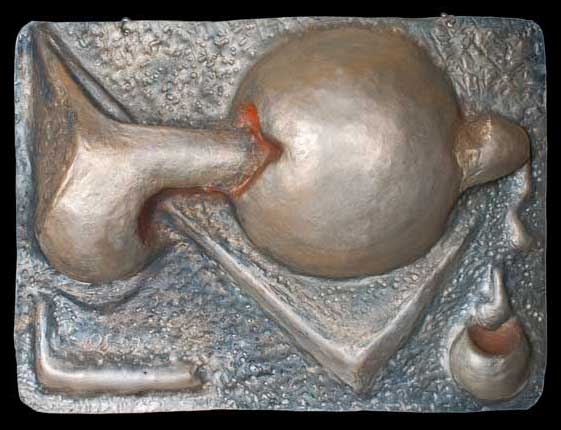 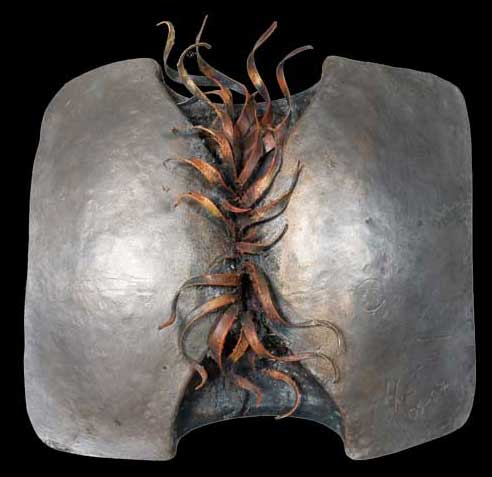 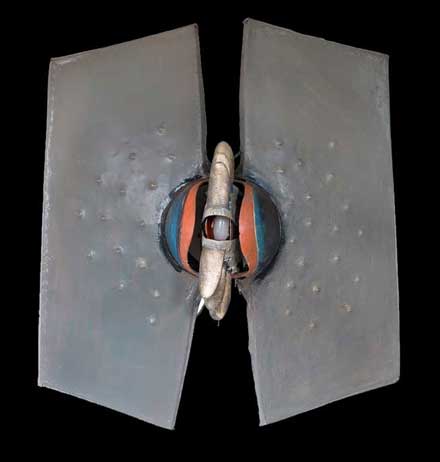 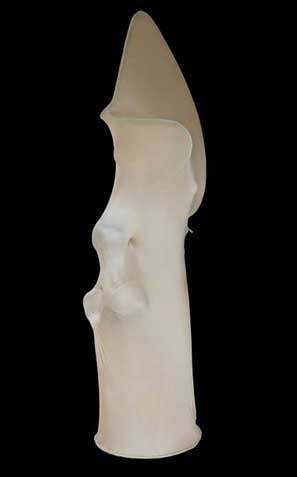 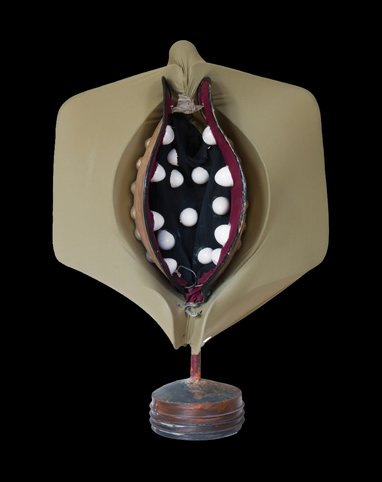